The RayShield Series ® provides the best available protection against any radiation type. Combining the physical theories of electromagnetic radiation and nuclear physics with our medical knowledge of how radiation affects the organs of the human body, we have come up with a solution that minimizes the effects of being in a radioactive environment as well as working with radioactive sources. But what kind of radiation exist, how is it measured and how does it affect the body?
The different kinds of radioactive decays and their attenuation properties are the following : 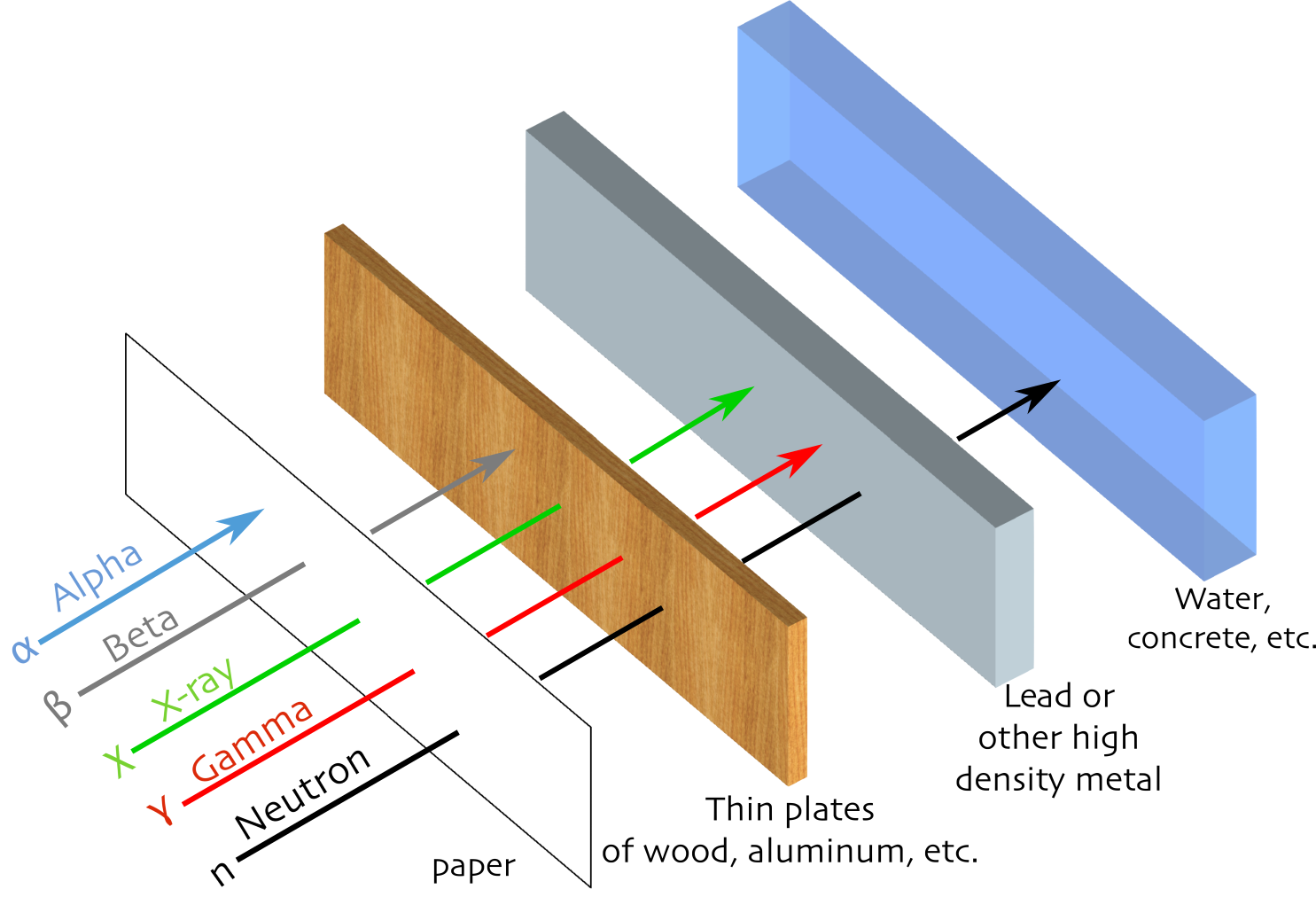 During an alpha decay, a rather heavy nucleus from some radionuclides with high atomic numbers emits a Helium particle which is usually traveling with 5% of the speed of light. The particle very quickly loses its energy due to collision with other particles and can thus quite easily be stopped by most materials. However once inside the body, a radioactive alpha source is highly dangerous and damaging to many organs due to the large energy released in the collisions. Therefore it is of vital importance not to have any alpha sources inhaled or resting on the clothes which subsequently can be inhaled and cause internal damage.The RayShield Series ® is guaranteed to protect completely against any interval of energetic alpha particles through the vest. Furthermore, the fact that it is easy to clean decreases the risk of inhaling alpha particles resting on the vest after maneuvering in a radioactive environment.

During a beta decay, a high energy elementary particle, electron or positron, is emitted from unstable atoms with speed very close to the speed of light. Beta particles can penetrate more than alpha particles and will relatively be stopped by a thin plate of aluminum. It can to some extent penetrate the human skin and cause epithelial and subepithelial damage, which can be of very dangerous character due to the high energy of the beta particles.This RayShield Series ® is guaranteed to protect completely against all beta radiation as well as rest products, primarily damaging gamma radiation, from the interactions with matter. While some protection models available today, only protect certain parts of the vital organs, the RayShield Series ® protects over 80% of the weighted radiation sensitive organs and allows no beta particles to penetrate and do damage to the body.

During a gamma decay, the nucleus emits a quantum of energy in the form of an electromagnetic particle defined as a gamma particle. Since the gamma particle is only energy with no mass, it travels with the speed of light and thus makes rather few interactions with matter compared to the alpha and beta particles. Gamma particles can though cause damage to the human body, and in particular for sources with high activity, the consequences can be disastrous. The fact that gamma radiation doesn’t interact a lot with matter makes it almost impossible to stop completely.The RayShield Series ® revolutionizes the field since the bar of what can be tolerated has now been moved a huge step. While some protection models available today, protects only against very low energetic radiation through a thin layer of lead, the RayShield Series ® protects completely for low to semi-high energy gamma radiation. Even for the highest gamma energies found in sites of nuclear disasters, it denies a significant fraction of particles, which no other protection equipment can do.

Neutrons are emitted by only a few radionuclides and are produced in nuclear fission reactions. Energetic neutrons carry no charge like electron and proton and do therefore not react with matter in the same way as the two others. Therefore, depending on its energy, it is much more penetrating than alpha and beta radiation and can sometimes be even more penetrating than gamma radiation. When the energetic neutron collides with matter, it loses energy due to its collisions with other atoms. These collisions break chemical bonds and damages the DNA, resulting in the disruption of atoms and molecules. Therefore neutron radiation is considered the most damaging to human tissue. Furthermore, neutron causes the emission of energetic alpha, beta and gamma particles when it collides with stable nuclei, as in metals why we have developed the RayShield Series ® uniquely by drawing the path of the different particles, including the neutrons, through the most optimal characteristics and order of materials. By the intelligent combination of materials, this vest is the first and only to protect against neutron radiation while at the same time considering and protecting against the gamma decay radiation, that the neutron creates during its collision processes.

The quantity relevant for discussing the effect of radiation is the absorbed dose. In scientific literature, International System (SI) units are used, which is gray (Gy) and sievert (Sv).

When describing X-ray, beta or gamma radiation, the gray and sievert are essentially equal but differs when describing alpha or neutrons as discussed below.

EFFECT OF RADIATION ON THE HUMAN BODY

The effect of radiation on the body varies depending on several factors, such as radiation dose and type duration of exposure and tissue sensitivity.

In practice, the radiation dose absorbed depends on the source of radiation. The following sources of radiation are listed from least to most energetic.

The radiation dose of naturally occurring sources has no acute systemic effect on the body because of its low energies that resemble only 0,0032 Gy (0,32 rads) annually on average. Also, exposure to man-made sources resembles slight values, 0,0062 Gy (0,62 rads) annually on average due to its relatively low energies.
However, exposure to some of the radioactive isotopes is quite different due to the decay of energetic alpha, beta, gamma, and neutrons. Absorbing a single dose within a very short time damages more than absorbing the same dose given over a longer time (weeks to months).
The most common radioactive isotopes found as air release at nuclear accidents (leakage from nuclear power plants) at Chernobyl and Fukushima are:

Depending on the activity of the sources the limit of how much radiation allowed to be absorbed can easily exceed.
Even at moderate activity and energies, the radiation dose will be accumulated rapidly, why withdrawal and evacuation have been the only surviving strategies before the RayShield Series ®.

Irradiation of the entire body (or most of the body) to >0,7 Gy (>700 rads) over a very short period (usually minutes) give rise to radiation sickness, also known as Acute Radiation Syndrome (ARS). The symptoms of ARS is dependent on radiation dose absorbed. Survival decrease with increasing dose. Therefore, higher doses result in more severe injuries and mild symptoms may occur as low as 0,3 Gy (300 rads).
The effects (and as a result of this the symptoms) of radiation injury (ARS) are expressed at different stages also depending on the absorbed dose. Note that the absorbed doses are all quoted in gamma equivalent values.

Depending on the usual absorbed radiation dose, three classical syndromes are described:

LD50/60: is the necessary dose that causes death among 50% of the exposed population within 60 days.

LD100: is the necessary dose that causes death to 100% of the exposed population.

The symptoms of the different stages are expressed in details in the following table.